Self Assessment Tax Returns: What are the Late Payment Penalties?

Individuals and businesses that have other sources of income need to report them in a tax return. Failing to send your tax return before the deadline can lead to late payment penalties of £100 plus interest if you sort it within three months. Later than that and there are further sanctions.

Here’s what they are and how to make sure you never have to deal with them.

Tax returns can be confusing and stressful, especially if you’re trying to get everything sorted last-minute before the government's deadline. You’ll need to send a Self Assessment tax return if you were a partner in a business partnership or you were a self-employed sole trader who earned more than £1,000 in the last tax year (6th April to 5th April).

If you have one source of income, then you typically don’t need to send a Self Assessment tax return. But you might need to send one if you receive untaxed income from:

There are some tax relief reasons for sending a Self Assessment and it’s also a way to prove you’re self-employed if you’re trying to claim for maternity allowance or tax-free childcare.


31st July is an additional deadline if you make advance payments on your tax bill.


You’ll be issued with a penalty if you’re required to send a tax return and you miss the deadline for either submitting your information or paying the money you owe. The penalty is a £100 fine if the tax return is up to three months late but there’s also interest charges to think about.


Longer than three months and you’ll be subject to a more significant fine. To work out what the exact figure will be, you can use HMRC’s estimation tool. Enter the dates of when you finally submitted everything and paid the bill and the tool will determine how much you might owe.


You can be penalised for both sending the return late and paying the bill late as well as interest which is added to the bill. The figure you receive isn’t confirmed and you should wait until you officially hear from the government, but it will give you a good idea of the total fine to expect.

Appealing Against a Penalty

If you feel as though you’ve been wrongly issued with a penalty or you believe you have a reasonable excuse, then you can appeal the decision made by the government.

HMRC will appoint an officer who wasn’t previously involved with your case to carry out the review process.

You’ll receive a penalty letter by post that should include the appeal form that you’ll need to fill out. Follow the instructions on the letter to begin the appeals process. You must send the form back within 30 days of receiving the penalty notice for it to be considered.

If it’s after the 30 days, then you’ll need to explain to the government why that deadline was missed too. We’d advise against this - it's certainly better to send the form back within the 30-day time frame.

To be successful when appealing, you’ll need to give a reasonable excuse for not filing your returns or paying your bill on time.

Some of the excuses that have been accepted in the past are:

HMRC lists some of the excuses that won’t be accepted, so if your reason is in this list, then it’s better to bite the bullet and pay the fine.

The rejected excuses include:

If you’re still unhappy with the outcome of the review into your case, then you can ask the tax tribunal to hear your case. The tribunal is independent of the government and hears both sides of the case before giving a ruling. This appeal needs to be done within 30 days of hearing the review decision.

Worried About Your Tax Returns?

If you’re worried about your tax returns, especially with Making Tax Digital (MTD) coming into effect in April 2019, then you should download our free summary sheet. It outlines exactly what MTD is, what impact it will have on your business and how you should prepare. 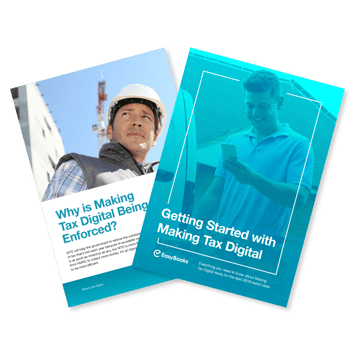 Heard a lot about MTD without even knowing what it actually means for you?

Download our free summary to make sure you're in the know before the April 2019 deadline.

Enter your email to receive updates, FREE ebooks and extra tips you won’t get anywhere else on the internet.

Coming soon
EasyBooks is accredited by
The institute of Certified Bookkeepers